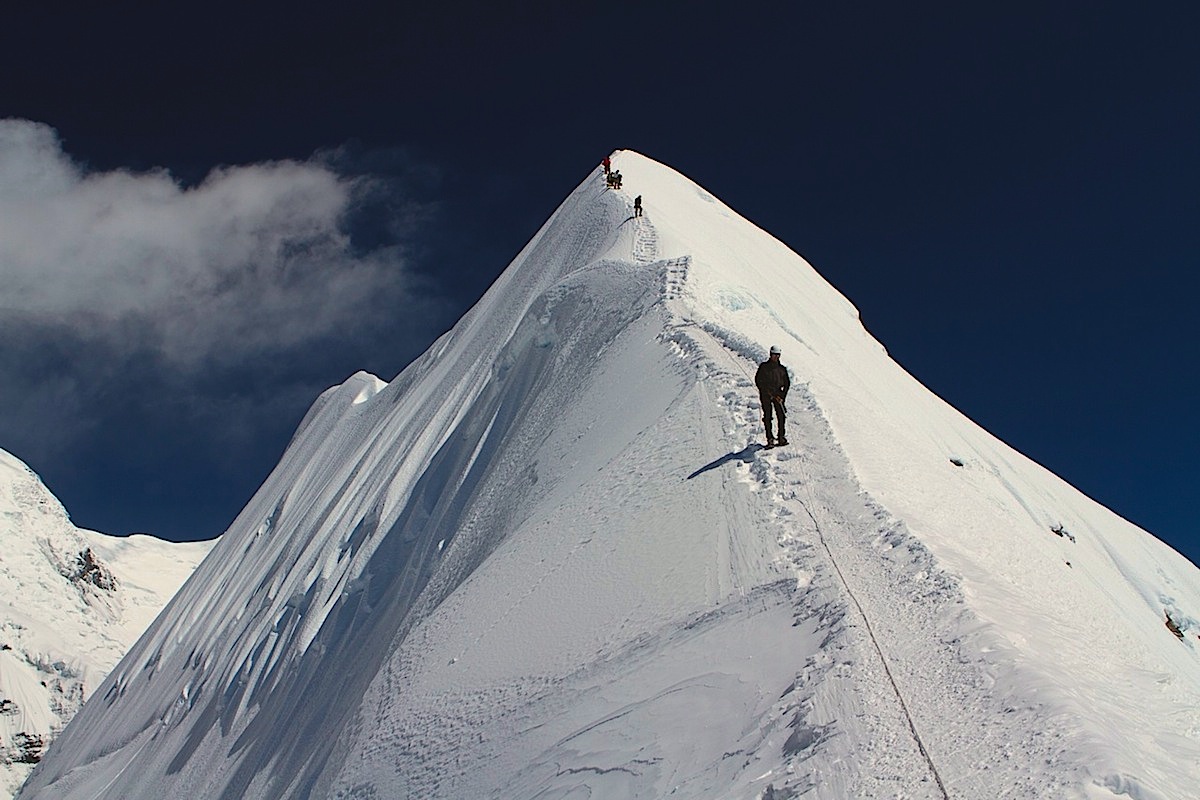 Altitude. One of medicines great mysteries. We know what changes, we know how it effects us, we have even worked out how to minimise the risks and treat problems when they occur. But will you handle it? Will I? Is it possible to prepare? What traits make you more susceptible to the effects of altitude? No one knows!

What changes at altitude?

Firstly, in order to understand what happens to our bodies, we need to understand whats changing in the environment. Due to a whole range of reasons that we wont go into, as we travel higher into the Earth's atmosphere the air pressure reduces. It makes sense, there's no pressure in space, and we hear it every time we travel on a plane, "the cabin is pressurised for your comfort".

If you have a basic understanding of physics, you'll be able to then derive that in a certain volume of air there will be less particles, meaning less nitrogen, and of course less of that vital oxygen. As an example, if you're at sea level and breath in 1 litre of air, you'll be inhaling 210ml of oxygen (O2 makes up 21% of our atmosphere at sea level). If you then travel to 2500m above sea level, a relatively benign elevation, one litre of air would only give you 150ml of oxygen. If we then travel to 5500m ASL, which is about as high as most people will get to while trekking, only 10% of the air volume is made up of oxygen, so for that one litre, you're only getting 100ml of sweet O's. Thats HALF of what you're used to at sea level! The summit of Everest has just under 7%, which is less than one third!

We all know that breathing is a fairly important action to keep us alive, and that our muscles and organs need that vital oxygen to operate. If we ascend too quickly, our bodies don't have time to adjust to the reduced oxygen levels, which can cause some serious problems. But its not just the lack of oxygen that can wreak havoc on us, its also the reduced air pressure, but we'll get to that later! 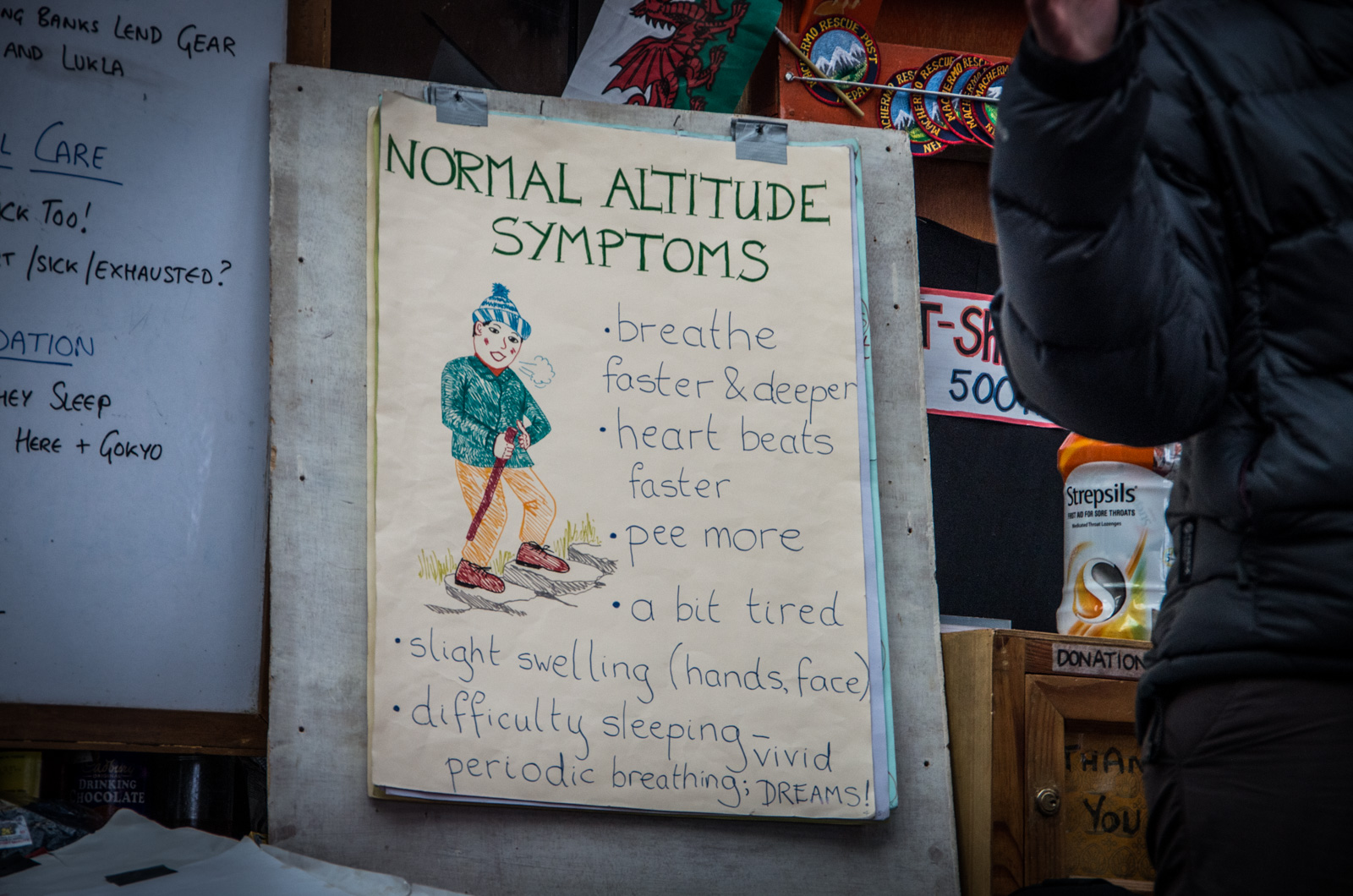 What could possibly go wrong?

There are a number of things that could go wrong when ascending to the higher elevations. Among them are Acute Mountain Sickness (AMS), High Altitude Pulmonary Oedema (HAPE) and High Altitude Cerebral Oedema (HACE).

These illnesses though are not to be confused with the standard 'symptoms' of exposure to altitude. When at high altitudes, its perfectly normal to have an elevated heart and respiratory rate. This is the bodies attempt to breath in more oxygen, and deliver it to your muscles and organs quicker. As you go even higher, you may find your appetite is limited, you are a little more lethargic than normal, and your exercise resistance is lower, meaning what should be easy enough for you now takes a lot more effort! Headaches and dizziness are also quite common, but not ideal, it's usually one of the first indicators that you're trying to ascend a little too fast. In saying that, high elevations are generally quite dry, and when trekking its easy to become dehydrated, which is also a leading cause of headaches, BUT, dehydration can also lead to altitude sicknesses so either way, a headache is a good indicator that something is wrong!

AMS or Altitude sickness is more or less your bodies general in-ability to adjust fast enough to the environment as you ascend. Symptoms include an exacerbation of the above symptoms, headaches, dizziness, nausea, vomiting, extreme tiredness and lethargy, loss of appetite and poor sleep. While symptoms can range from mild to extreme, they usually begin to show 6-12 hours after ascending. If symptoms are mild enough, it is possible to rest at the current altitude while waiting for your body to catch up and when subsided, you may proceed, although if this reoccurs, its best to descend! Your body will always adjust faster when its resting under less stress. If in doubt, go down!

HAPE is defined as a build up of fluid in the lungs, caused by altitude, and symptoms include severely reduced exercise tolerance, short heavy breathing, wheezing, and when laying down gurgling in the lungs while breathing. If things get bad, specks of blood (pink or red) can be seen in the sputum when coughed up. Overall, you don't feel good at all, and you know about it! HAPE can be a bit of a wild card when it comes to altitude illnesses. About half of cases it develops on its own (without symptoms of AMS), the other half it can develop with AMS or even HACE. It can develop rapidly or slowly, often on the second night of a new high altitude, but sometimes during the descent. You may be more susceptible to it if you have a weakened respiratory system from infection or even if its just super cold. Symptoms present very similarly to bronchitis, pneumonia and asthma, which can complicate diagnosis leading to further problems. The best treatment for HAPE is rest. While descent for any altitude illness is ideal, the priority with HAPE is rest as over exertion of the respiratory system can worsen symptoms, so if you can slowly descend do so, but if descent is too difficult, rest, take supplemental oxygen or get into a portable altitude chamber and descend when symptoms subside.

High Altitude Cerebral Oedema is similar to HAPE but this time the fluid build up is placing pressure on the brain. As you could imagine, it's as bad as it sounds. HACE may come on suddenly or be a further development from AMS, the defining point of difference is declining brain function, loss of physical coordination (ataxia) and possible change or loss in level of consciousness. Symptoms include severe headaches (unaffected by ibuprofen), impaired brain function making simple tasks difficult (i.e. packing bags, tying shoelaces, walking etc), disorientation/confusion, irritability, poor decision making, even blurred vision and hallucinations have be known to occur. Basic coordination and balance tests as well as some simple cognitive questions are great tools to assist in diagnosis. One of the most difficult aspects of diagnosing HACE is that as it effects the brain, the victim often doesn't know that there is anything wrong and therefore wont be telling your that they're feeling off. While Dexamethasone (a steroid) is the go to drug for HACE, by far the best treatment is rapid and immediate descent. Get down, fast! 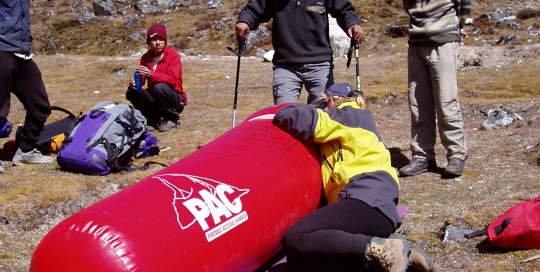 How do we avoid problems?

Well that all sounds very scary, but if you're educated and careful, you can travel to extreme altitudes without problems, and enjoy the wild remoteness through whichever pursuit you choose.

The generally accepted rules for ascent are a once you're above 2500m, you shouldn't ascend more than 300-500m per day (from camp to camp) and every 3 days or 1000m you should take an extra day to rest/acclimatise. On this day, you should try and gain as much altitude as possible then descend back down to sleep and recover. This process exposes your body to higher elevations, and then returns it to a more comfortable place to sleep and speed up acclimatisation.

In order to maximise you're ability to acclimatise you should plan to ascend slowly, take plenty of rest and stay well fed and hydrated. Have extra time and/or a flexible itinerary also increases your chances of success as should any issues arise, you will have time to get sorted before continuing. The longer you plan to stay at extreme elevations (above 4500-5000m) the slower you should ascend.

Diamox (acetazolomide) is a drug commonly used to either assist in rapid ascent (not recommended) or as a prophylactic to assist in your acclimatisation. A half course can be taken to aid your bodies ability to adjust to the atmospheric changes, while still leaving room to jump to the full treatment dose if required. There has been some hesitation to taking drugs like Diamox, with claims it can cover up your symptoms making you reducing your ability to pick up on any possible problems. This is simply not the case. Generally speaking, apart from having to get up and pee through the night (Diamox is a diuretic) and some random tingling of your nose and finger tips, there are no real down sides to this approach. Overall, diamox increases your bodies ability to take oxygen on board, therefore it's good. One of its other side effects just happen to be an increased respiratory rate while sleeping, which coincidently, further improves your oxygen uptake during your most important rest and recovery period!

At Impulse Adventures, your safety is our number one priority. All of our itineraries that travel to high altitudes have been crafted with care and thought to slow safe acclimatisation. All of our guides are highly trained and skilled at identifying altitude illnesses and how to treat them as well as being equiped with well stocked medical kits. Any of our Himalayan expeditions that have a technical (climbing) element, prolonged periods of high or extreme altitude or travel to more remote regions are escorted by an Australian expedition leader with further training and additional equipment such as an additional medical kit, satellite phone, and Portable Altitude Chamber (PAC).

If you have any questions or concerns about traveling to altitude anywhere in the world, get in touch with a professional (us) for a chat! As with most things, education is the key to prevention and we're always happy to help anyone make their adventure safer!